The Myth of the Rational Market - A Review 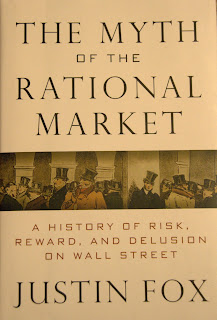 Justin Fox, "The Myth of the Rational Market - A history of Risk, Reward, and Delusion on Wall Street" (HarperCollins Publishers, 10 East 53rd Street, New York, NY 10022, First Edition, 2009). pp.400, References and Further Readings, $15, ISBN - 978-0060598990
Stigler once was walking with one of his friends on a lonely road of Chicago. His friend tried to draw his attention to a $20 bill which was on the road. In reply what Stigler said became the famous or infamous – however you may want to interpret – definition of efficient market hypothesis, “It cannot be; had it been there someone would have already been taken it”. The proponents of Efficient Market Hypothesis always emphasized that the market is efficient to fix the price at any point of time. In this book, Justin Fox used the same story to elaborate the idea of efficient market hypothesis, though in a critical way. One might very well argue about the difference between strong and weak form of efficient market, but still this definition of efficient market has become a popular joke, particularly after the horrific economic downturn resulted from the failure of financial institutions last year.

As the name might suggest this book is not yet another cliché analysis of the last year’s economic depression. According to the writer Justin Fox – Editor and writer of the Fortune magazine and a long time columnist of the Times magazine – this is nothing but a journalistic effort. I leave the interpretation on the readers, but definitely can assure one thing that you could read it as if you are reading a thriller. No, don’t take me wrong; this is not a thriller, a mere history of rising of finance as a branch of Economics and stories about some famous economists who contributed to the field of mathematical economics. The book does a very good job not only telling the stories but also explaining how that edifice was built – bringing the real understanding of the sociology of the academic world.

The book starts with Erwin Fisher. On 15th October, 1929 Fisher declared that stock price has reached a permanent plateau. The great depression started after two weeks of this infamous prediction. Paul Samuelson once classified Fisher’s Ph.D. thesis as one of the most important works, if not the best. Unfortunately Fisher is known for his infamous prediction about the stock market. The book also tells the story of how Fisher lost his thesis in a telephone booth in New York and how he re-wrote it again.

During Second World War, American soldiers were having hard time in deciding the size of their anti aircraft cells. Using large 20 cells would increase the potential to destroy more; on the other hand 600 small cells would increase the probability of hitting the right target with perfection. Few high ranked soldiers flew to take a class from one of the famous statistician Milton Friedman. The resulting theory is the basis of “Operations Research” and the Portfolio Theory. The book is full of several such stories.

The book describes complex theories like “M&M Propositions” in a way so that anybody even without any background in Finance can understand the theory well. Fox used famous “Yogi Bera” to describe the theory. One day the Pizza delivery man asked Yogi whether to cut the Pizza in 8 pieces or in 16 pieces. Yogi answered that he was very hungry that day and wanted it to be cut in 16 pieces. According to “M&M Proposition” it does not matter whether you cut it in 16 pieces or in 8 pieces, the amount of pizza remain same, either way. This is a very seductive theory which helped developing the theory of finance the way it is now. Both Modigliani and Miller won the Nobel Prize for this.

These are some of the glimpses of many such stories and the journey along the incidents which framed the theory of finance. The book ends with Alan Greenspan. The main question Fox raised is why the theory of bubble is yet to be developed. This is not a new quest; people in B-School and in many other academic institutions are trying to find the answer. But yet to find a concrete answer how to differentiate a bubble from actual growth.

The book also contains a brief description of all the associated academicians and a meticulous list of all the referred books and publications. It is written in a very lucid way so that anybody can read the book. As a book it seemed a good collection to me. Fox and the publishers could have done better job in selecting the name of the book. The name suggests a concrete conclusion on the market but the purpose of the book is not to draw any final conclusion.
Posted by Aryya at 7:53 PM
Labels: Book Review